LENA MATTHEWS - FOR LOVE'S SAKE ONLY

The last thing Charlotte Sane expects to find at a Rodeo is her dream man, but even she can’t deny the instant attraction that leads her straight into the arms of a handsome cowboy named Ty Wilcox. The two have nothing in common. Nothing except insane, inexplicable, but undeniable desire.Ty knows from the instant they first kiss that he and Charlotte are meant to be together. Proving it to strong-willed Charlotte? A whole different bull-ride. The headstrong beauty is running scared, but she's got another thought coming if she thinks Ty will let her walk away.Charlotte’s finally met her match in Ty, because this cowboy knows it’ll take a firm hand to win her wild heart. 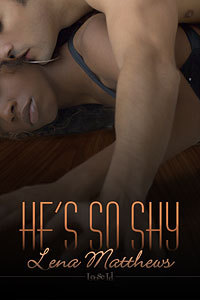 Gillian Foxe has set her sights on Lennon Wright, but unfortunately for him, it's not in a hot, sexy way. After overhearing two women gossiping about him, Gillian decides to help him out by turning the cute introvert into a social butterfly, even if it's against his wishes. She's convinced she knows what's best for the shy man, but of course he doesn't see it that way. Everything isn't always what it seems, and no one knows that better than Lennon. Yes he keeps to himself, but it's not for the reason Gillian thinks. Still, he can't help but be amused Gillian thinks he's shy. He may not be as outgoing as the sexy woman is, but that doesn't mean he's dating deficient. In fact, he's had his eye on a special woman for a while now. Unfortunately Gillian lacks the ability to see beneath his good guy persona. But if a bad boy is what she likes, Lennon has a few naughty skills up his sleeve that might help take the blinders off and prove to Gillian he's not so shy after all. Publisher's Note: This book contains explicit sexual content, graphic language, and situations that some readers may find objectionable: Anal play/intercourse, menage (m/f/m), voyeurism. 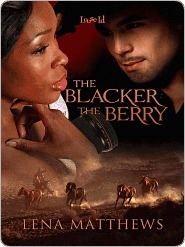 LENA MATTHEWS - THE BLACKER THE BERRY

Tamara Holifield could never have guessed one little favor would change her entire world, but it does. When her best friend Charlotte's husband Ty asks her to come out to visit to cheer up the homebound pregnant woman, she readily agrees. The only problem with Ty's plan is Tamara's lack of a car. Luckily for her, he has a solution, in the form of his best friend, lawyer Russell Crichton. Russell could never have imagined doing a favor for Ty would alter his perception of beauty or disrupt his entire life, but it does. Tired of a job filled with money-hungry thankless drones, Russell decides to ditch it all and follow his childhood dream, running his own ranch. Starting up a new venture is going to take time and focus and the last thing he needs is the distraction of his sexy carpooler. Russell never believed he would be attracted to a plus-size woman, nor did city-slicker Tamara think she would ever have anything in common with a white cowboy, but sizzling sex soon changes both their minds. Now, if they can look past their obvious differences, they might just find out that the blacker the berry, the sweeter the juice.
Posted by Engele at 2:40 PM