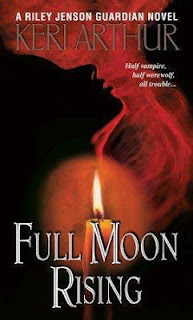 In this exciting debut, author Keri Arthur explodes onto the supernatural scene with a sexy, sensuous tale of intrigue and suspense set in a world where legends walk and the shady paths of the underworld are far more sinister than anyone envisioned. A rare hybrid of vampire and werewolf, Riley Jenson and her twin brother, Rhoan, work for Melbourne’s Directorate of Other Races, an organization created to police the supernatural races–and protect humans from their depredations. While Rhoan is an exalted guardian, a.k.a. assassin, Riley is merely an office worker–until her brother goes missing on one of his missions. The timing couldn’t be worse. More werewolf than vampire, Riley is vulnerable to the moon heat, the weeklong period before the full moon, when her need to mate becomes all-consuming.… Luckily Riley has two willing partners to satisfy her every need. But she will have to control her urges if she’s going to find her brother….Easier said than done as the city pulses with frenzied desire, and Riley is confronted with a very powerful–and delectably naked–vamp who raises her temperature like never before. In matters carnal, Riley has met her match. But in matters criminal, she must follow her instincts not only to find her brother but to stop an unholy harvest. For someone is doing some shifty cloning in an attempt to produce the ultimate warrior–by tapping into the genome of nonhumans like Rhoan. Now Riley knows just how dangerous the world is for her kind–and just how much it needs her. 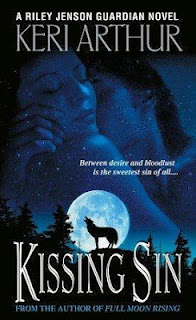 From Melbourne’s gleaming skyscrapers to its throbbing nightclubs, Riley Jenson’s world is raging with danger and desire. A drop-dead-gorgeous werewolf–with a touch of vamp coursing in her blood–Riley works for an organization created to police the supernatural races. But when she wakes up naked and bruised in a barren alley, she knows only that she must run for her life. Within moments Riley collides with the sexiest man she’s ever seen: steely, seductive Kade, who is fighting a life-and-death battle of his own. With old lovers and enemies gathering around her, Riley knows she is being pursued by a new kind of criminal. Because in Riley’s blood is a secret that could create the ultimate warrior–if only she can survive her own dangerous desires…. 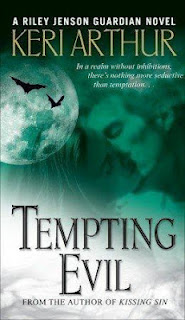 In a world of sorcery and seduction, the nights bring out the beautiful, the damned, and the desired. Here, Riley Jenson is on her own–half werewolf, half vampire, working for an organization created to police the supernatural races. Trusting her superiors and lovers barely more than she trusts her worst enemies, Riley plays by her own set of rules. Her latest mission: to enter the heavily guarded pleasure palace of a criminal named Deshon Starr–a madman-scientist who’s been messing around in the gene pool for decades.  With two sexy men–a cool, seductive vampire and an irresistibly hot wolf–vying for her attention, Riley must keep focused. Because saving the world from Deshon Starr will mean saving herself–from the trap that’s closing in around her. . . . 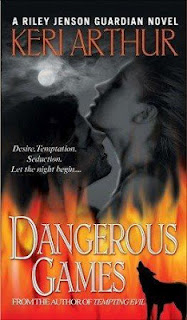 
In Melbourne’s urban underworld, there’s a nightclub for every fantasy and desire. But for Riley Jenson, one such club has become an obsession. Riley, a rare hybrid of vampire and werewolf, hasn’t come in pursuit of pleasure but of an unknown killer who’s been using the steamy nightspot as his hunting grounds. Leave it to Riley to find the only ticket into the heavily guarded club: Jin, a deliciously hot-bodied bartender who might just provide the key to unmasking a killer unlike any other in the Directorate’s experience. Taunted by a former colleague turned rogue, distracted by an ex-lover’s attentions, Riley follows Jin into a realm of pleasure she could never have imagined. And as danger and passion ignite, a shocking mystery begins to unravel—one where Riley herself becomes the ultimate object of desire.... 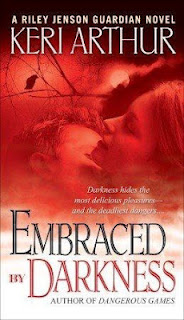 
BONUS: This edition contains excerpts from Keri Arthur's Destiny Kills and Darkest Kiss.
She's hunting a killer— and shattering every boundary— she's ever known.… Part vamp, part werewolf, Riley Jenson plays by her own rules, whether it’s her stormy love life or her job as a guardian. But when her family’s alpha male demands that she solve the mystery of a vanished girl, Riley can feel a trap closing in around her. Because the job comes with a catch: if Riley fails, her own mother will die.  Now the stakes are raised, the hunt is on...and when more women vanish, Riley is caught between a lover who demands that she give up her work, a serial killer who knows no boundaries, and a club where humans and supernaturals mix—at their own peril. Thrust into a realm of seduction and violence unlike any she could have imagined, Riley has to battle to save everything she holds dear. But the ultimate hunt has only just begun.... 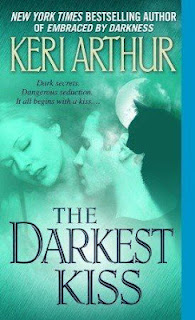 BONUS: This edition contains excerpts from Keri Arthur's Destiny Kills and Deadly Desire.
Danger turns her on. Desire turns her dangerous... Riley Jenson hunts evildoers—and does it with a style all her own. With vamp blood coursing her through her veins, and a werewolf’s uncanny instinct for danger, Riley wears snakeskin stilettos and pure, in-your-face attitude when she plunges into her latest case: hunting down a killer whose victims are high-society strumpets—and the rich and powerful men they’ve dated.  But for Riley, the case takes a chilling turn when a second killer starts trailing mutilated bodies of his own: a crazed young vamp choosing victims from a past marked by tragedy. Riley knows she’s got the skill and cunning to catch two serial killers at once…until one of them strikes inside her own tight-knit clan—and a sexy beast of a vampire re-enters her life to aid in the hunt. His name is Quinn. He’s lived forever, shed blood, and shared pleasure…and he’s the only man over whom Riley has absolutely no control…. 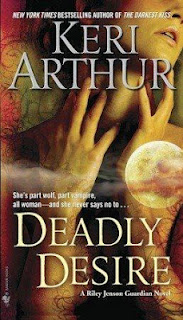 Seduction that kills. Pleasure to die for. She just can’t resist . . . Guardian Riley Jenson always seems to face the worst villains. And this time’s no different. For it’s no ordinary sorceress who can raise the dead to do her killing. But that’s exactly what Riley expects to find at the end of a trail of female corpses used—and discarded—in a bizarre ritual of evil. With pressure mounting to catch one fiend, another series of brutal slayings shocks the vampire world of her lover, Quinn. So the last thing Riley needs is the heat of the upcoming full moon bringing her werewolf hormones to a boil—or the reappearance of a sexy bounty hunter, the rogue wolf Kye Murphy.  Riley has threatened Murphy with arrest if he doesn’t back off the investigation, but it’s Riley who feels handcuffed by Kye’s lupine charm. Torn between her vamp and wolf natures, between her love for Quinn and her hots for Kye, Riley knows she’s courting danger and indulging the deadliest desires. For her hunt through the supernatural underworld will bring her face-to-face with what lurks in a darkness where even monsters fear to tread. 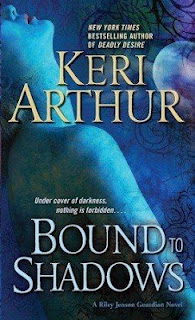 Bound to Shadows (Riley Jenson Guardian #8) by Keri Arthur
BONUS: This edition contains excerpts from Keri Arthur's Mercy Burns and Moon Sworn. In the darkness, demons come out to play . . .  and someone must bring their sins to light. Part vampire, part werewolf, Riley Jenson knows what can happen when vamps don’t play well with others. But she’s never seen anything like this: a series of brutal murders surrounding the latest hot spot for vampire-human hook-ups — and the victims aren’t just killed, they’re beheaded. Now Riley is launching into action, toying with a seductive—and highly suspicious — club owner, and finding herself in the middle of another mystery: women being killed one by one, without a trace of violence.  For Riley, solving multiple cases — in a world going mad with human and vampire passions — would have been tough enough. Instead she has two jealous lovers on her hands: Kye Murphy, the amber-eyed werewolf who makes Riley’s wolf blood howl — and Quinn, the cool, elegant vamp who has over a thousand years’ experience at fulfilling women’s desires. While she’s busy juggling these two sexy beasts, Riley’s detective work takes a stunningly violent turn. Finding a murderer is now a matter of life and death. Especially since the killer has long since found her . . .

Some nights never end. Some desires never die. . . . She ventures where no one else dares—into realms of peril and pleasure. But will this next journey be her last?  Shape-shifting werewolf and vampire Riley Jenson is through with death–causing it, solving it, surviving it. Her soul mate, Kye Murphy, is dead–and at Riley’s own hands. Not even the seductive embrace of her vampire lover, Quinn, can fully ease her mind, for she has begun questioning everything that makes her Riley–including her job at the Directorate. Now, the ritualistically slain bodies of ex-cons have started turning up. Reluctantly, Riley takes the case, but something even worse is waiting in the wings. For a vicious enemy from her past is determined to strip Riley of everything that gives her life any meaning: her lover, her brother–and even her own identity. Can Riley survive this ultimate assault? All she knows is, she must fight one last time to find answers, before everything goes dark forever…