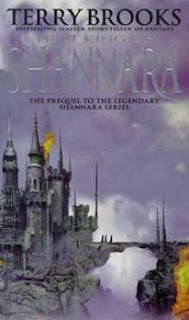 TERRY BROOKS – THE ORIGINAL SHANNARA TRILOGY 0 – FIRST KING OF SHANNARA
THE SECOND WAR OF THE RACES
Horrified by the misuse of magic they had witnessed during the First War of the Races, the Druids at Paranor devoted themselves to the study of the old sciences, from the period before the collapse of civilization a thousand years before. Only the Bremen and a few trusted associates still studied the arcane arts. And for his persistence, Bremen found himself outcast, avoided by all but the few free-thinkers among the Druids.
But his removal from Paranor was not altogether a terrible thing, for Bremen learned that dark forces were on the move from the Northlands. That seemingly invincible armies of trolls were fast conquering all that lay to their south. That the scouts for the army - and its principal assassins - were Skull Bearers, disfigured and transformed Druids who had fallen prey to the seductions of the magic arts. And that at the heart of the evil tide was an archmage and former Druid named Brona!
Using the special skills he had acquired through his own study of Magic, Bremen was able to penetrate the huge camp of the Troll army and learn many of its secrets. And he immediately understood that if the peoples of the Four Lands were to escape eternal subjugation they would need to unite. But, even united, they would need a weapon, something so powerful that the evil magic of Brona, the Warlock Lord, would fail before its might… 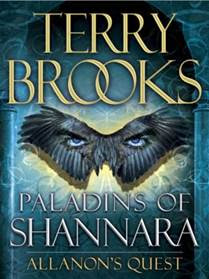 TERRY BROOKS – PALADINS OF SHANNARA 1 – ALLANON’S QUEST
The history is thus: The once-Druid Brona, seduced by his pursuit of dark magic, was forever transformed into the Warlock Lord—whose evil would be the downfall of the Four Lands and the death of the Races. Against him, the Elven King Jerle Shannara wielded the fabled sword that bore his surname and triumphed. Or so it was believed. But though the Dark Lord was driven out . . . he was not destroyed.
The Druid Allanon knows only too well the prophecy passed down to him by his late master: that eventually the Warlock Lord will return. Now, after hundreds of years, that day seems imminent. And the time is at hand for the Sword of Shannara to once more be brought forth from its sanctuary to serve its ancient purpose. All that remains is for a blood descendent of the Elven house of Shannara to carry the blade into battle.
With ever more portents of doom on the horizon, Allanon must seek out the last remaining Shannara heir, who alone will bear the burden of defending the Four Lands’ destiny. But with agents of darkness closing in from behind, unexpected enemies lying in wait ahead, and treachery encroaching on every side, there can be no certainty of success. Nor any assurance that this desperate quest will not be the Druid’s last. 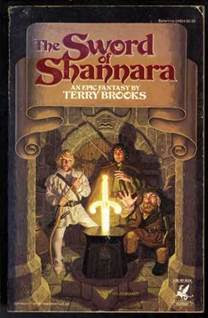 TERRY BROOKS – THE ORIGINAL SHANNARA TRILOGY 1 – THE SWORD OF SHANNARA
Long ago, wars of ancient Evil ruined the world and forced mankind to compete with many other races - gnomes, trolls, dwarfs, and elves. In peaceful Shady Vale, half-elfin Shea Ohmsford knows little of such troubles until giant, forbidding Allanon, with strange Druidic powers, reveals a supposedly-dead Warlock Lord plots to destroy the world.
The sole weapon against this Power of Darkness is the Sword of Shannara, only usable by a true heir of Shannara. On Shea, last of the bloodline, rests the hope of all the races. Soon a Skull Bearer, dread minion of Evil, flies into the Vale to kill Shea. To save the Vale, Shea flees, drawing the Skull Bearer after him. 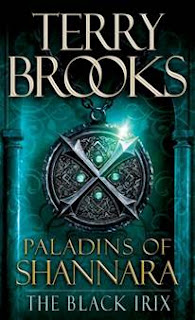 TERRY BROOKS – PALADINS OF SHANNARA 3 – THE BLACK IRIX
An old friend urges Shea Ohmsford to take a dangerous risk in the concluding story of this gripping Shannara eBook series by New York Times bestselling fantasy master Terry Brooks.
Shea Ohmsford has had quite enough of quests. A year after surviving a harrowing odyssey, he is still plagued by troubling memories and dreams. A mysterious trafficker in spells and potions provides a restorative nostrum for the stricken Shea . . . along with a warning: Shea will break his vow to never again leave Shady Vale. And then the potion-maker’s prophecy comes to pass.
A thief, adventurer, and notoriously charismatic rogue, Panamon Creel unexpectedly appears in the Vale with a request for his long-time friend, Shea—journey into the untamed Northland, infiltrate the stronghold of a sinister dealer in stolen goods, and capture a precious artifact: the sacred Black Irix. Creel wishes to return this treasure to its rightful owners. Shea cannot refuse such a just cause. But what lies behind the black castle walls they must breach? And will this quest truly be their last? 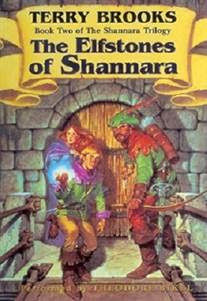 TERRY BROOKS – THE ORIGINAL SHANNARA TRILOGY  2 – THE ELFSTONES OF SHANNARA
Ancient Evil threatens the Elves: The ancient tree created by long-lost Elven magic, is dying. When Wil Ohmsford is summoned to guard the Amberle on a perilous quest to gather a new seed for a new tree, he is faced with the Reaper, the most fearsome of all Demons. And Wil is without power to control them... 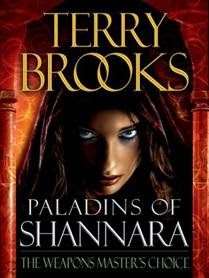 TERRY BROOKS – PALADINS OF SHANNARA 2 – THE WEAPONS MASTER’S CHOICE
His extraordinary—and deadly—skills have earned Garet Jax renown and infamy as the man called the Weapons Master. Rootless, solitary, and endlessly sought after, he roams the Four Lands, loyal to none but himself . . . and whomever can afford his services as warrior, assassin, and avenger for hire. But Lyriana is unlike any who have come to him before: as beautiful as she is bold, as enigmatic as the distant city she is desperate to save, and possessed of an intangible, irresistible allure that entices even the hardened Garet Jax more than any amount of gold or silver ever could.
But the challenge she comes bearing may give even the celebrated Weapons Master pause. The remote city of Tajarin, Lyriana’s home, is being laid to waste by an immensely powerful and boundlessly evil warlock of the deadliest order. With the populace enslaved and no champion to stand against the invader, Tajarin will soon be wiped from the map—perhaps only the first city to fall. Whatever hope exists rests in the deft hands, lethal blades, and unerring instincts of Garet Jax. With righteous fury in his blood, and feelings he has never before known in his heart, he will face the most dire of enemies, and dare the blackest of fates, for the mysterious woman at his side—whose deepest secrets have yet to be revealed. 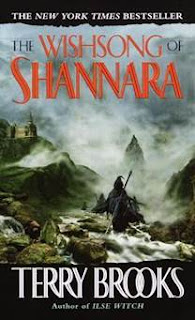 TERRY BROOKS – THE ORIGINAL SHANNARA TRILOGY 3 – THE WISHSONG OF SHANNARA
An ancient Evil is stirring to new life, sending its ghastly Mord Wraiths to destroy Mankind. To win through the vile growth that protects this dark force, the Druid Allanon needs Brin Ohmsford - for she alone holds the magic power of the wishsong. Reluctantly Brin joins the Druid on his dangerous journey. But a prophecy foretells doom, as Evil nurses its plans to trap the unsuspecting Brin into a fate far more horrible than death.
Thus continues the enthralling Shannara epic, a spellbinding tale of adventure, magic, and myth… 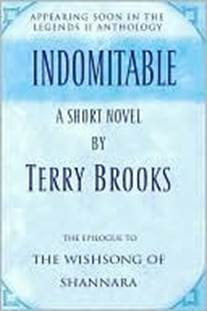 TERRY BROOKS – THE ORIGINAL SHANNARA TRILOGY – 3.25 - INDOMITABLE
BONUS: This edition contains an excerpt from Terry Brooks's The Measure of the Magic.
The time of the Shannara follows in the wake of an apocalypse that has destroyed the old world and very nearly annihilated its people as well. A thousand years of savagery and barbarism have concluded at the start the series with the emergence of a new civilization in which magic has replaced science as the dominant source of power. A Druid Council comprised of the most talented of the new races–Men, Dwarves, Trolls, Gnomes, and Elves, names taken from the old legends–has begun the arduous task of rebuilding the world and putting an end to the racial warfare that has consumed the survivors of the so-called Great Wars since their conclusion.
But the wars continue, albeit in a different form. Magic, like science, is often mercurial, can be used for good or evil, and can have a positive or negative effect on those who come in contact with it. In The Sword of Shannara, a Druid subverted by his craving for magic’ s power manipulated Trolls and Gnomes in his effort to gain mastery over the other races. He failed because of Shea Ohmsford, the last of an Elven family with the Shannara surname. Shea, with the help of his brother and a small band of companions, was able to wield the fabled Sword of Shannara to destroy the Dark Lord.
Subsequently, in the Elfstones of the Shannara, his grandson Wil was faced with another sort of challenge, one that required the use of a magic contained in a set of Elfstones. But use of the Stones altered Wil’s genetic makeup, so that his own children were born with magic in their blood. As a result, in the third book of the series, the Wishsong of Shannara, Brin and her brother Jair were recruited by the Druid Allanon to seek out and destroy the Ildatch, the book of dark magic that had subverted the Warlock Lord, and was now doing the same with the Mord wraiths.
The story that follows takes place several years after the conclusion of The Wishsong and again features Jair Ohmsford, who must come to terms with his obsession with the past and his use of his magic that his sister has warned him not to trust. 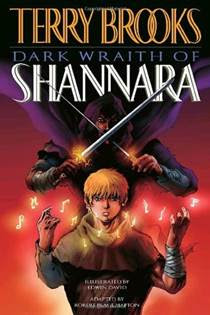 TERRY BROOKS – THE ORIGINAL SHANNARA TRILOGY 3.5 – DARK WRAITH OF SHANNARA
Possessing an awesome power he is only beginning to understand, young Jair Ohmsford must summon the devastating yet darkly seductive magic of the wishsong on a fateful mission to save his friends . . . and protect the future from the forces of evil.
If you ve never ventured into the wondrous world of Shannara, consider this an ideal opportunity. Prepare to enter the breathtaking realm of the Four Lands, where beings both noble and sinister have quested and clashed, crossed swords in the names of darkness and light, and engaged in adventures rich with mystery and majesty.
Since the death of Allanon, life in the Four Lands has drastially changed. Yet Par Ohmsford still has some power of the Wishsong. And when a message from the ancient Druid, Allanon, reaches them, Par is ordered to recover the long-lost Sword of Shannara, and the glory that once was the Four Lands....